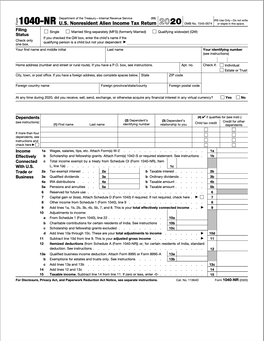 Many US taxpayers are familiar with Form 1040, the tax return that many Americans files once a year.  What about non-US taxpayers that have a US-filing requirement and need to file a tax return?  It is when Form 1040-NR, US Nonresident Alien Income Tax Return, comes into the picture.

The Internal Revenue Code aka the tax laws defines a US Person as:
As a comparison, a foreign person includes:
The basic rule is if you are not a U.S. citizen, then you are considered a nonresident for US tax purposes unless you meet the Green Card Test or the Substantial Presence Test for the calendar year (January 1 - December 31).

Green Card Test
You are a resident, for U.S. federal tax purposes, if you are a lawful permanent resident of the United States at any time during the calendar year. This is known as the "green card" test.

You are a lawful permanent resident of the United States, at any time, if you have been given the privilege, according to the immigration laws, of residing permanently in the United States as an immigrant. You generally have this status if the U.S. Citizenship and Immigration Services (USCIS) issued you a Permanent Resident Card, Form I-551, also known as a "green card."
You continue to have U.S. resident status, under this test, unless: If you meet the green card test at any time during the calendar year, but do not meet the substantial presence test for that year, your residency starting date is the first day on which you are present in the United States as a lawful permanent resident.

Exempt Individual
Do not count days for which you are an exempt individual. The term "exempt individual" does not refer to someone exempt from U.S. tax, but to anyone in the following categories:
If you exclude days of presence in the U.S. for purposes of the substantial presence test because you were an exempt individual or were unable to leave the U.S. because of a medical condition or medical problem, you must include Form 8843, Statement for Exempt Individuals and Individuals With a Medical Condition, with your income tax return. If you do not have to file an income tax return, send Form 8843 to the address indicated in the instructions for Form 8843 by the due date for filing an income tax return.
If you do not timely file Form 8843, you cannot exclude the days you were present in the U.S. as an exempt individual or because of a medical condition that arose while you were in the U.S.  This does not apply if you can show, by clear and convincing evidence that you took reasonable actions to become aware of the filing requirements and significant steps to comply with those requirements.

Closer Connection Exception to the Substantial Presence Test
Even if you met the substantial presence test you can still be treated as a nonresident of the United States for U.S. tax purposes if you qualify for one of the following exceptions: ​
Why Choose Trans-Pacific Accounting and Business Consuting
International-related taxation in the Internal Revenue Code is extremely complex and confusing.  Many seasoned CPAs and tax return preparers are not familiar with the filing requirements.  It is very common for them to miss reporting foreign income, forms, and information.  The IRS has heightened its enforcement on non-compliance on foreign-related reporting, and penalties are generally extremely high.  Not sure if you need to file or if your current CPA or tax return preparer is preparing your tax return correctly?  Not sure if you are filing all the required forms?  Contact us now for a free consultation.